When you saddle a trip with a moniker as lofty as 'Best of Greece', you’d better make sure it lives up to the hype. This one does. Compiling the top moments from our best-selling trips in the region, this comprehensive tour through the cradle of Western Civilization brings the distant past and vibrant present into sharp focus. Between the must-see historical sites of Athens and Delphi, the rugged plateaus of the fabled Samariá Gorge, personal encounters in isolated Cretan villages and the breezy sway of Santorini at sundown, you won’t have a moment to waste. Witness Greece—in all her timeless glory—with us. 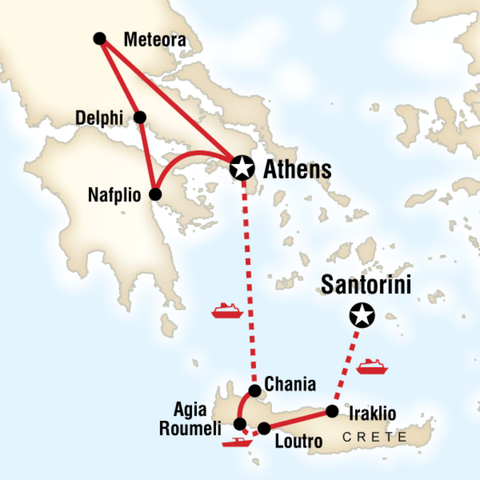 Arrive in Athens at any time. As your fellow travellers are arriving at various times throughout the day, there are no planned activities except for an important Welcome Meeting in the evening, so check-in to our hotel and enjoy the city. Look out for a message from your Chief Experience Officer (CEO) at the hotel reception for more details on when and where to meet the group in the evening. We recommended arriving a day or two early to fully explore this world-renowned city.

Athens is the capital of Greece, the city of the Olympic idea, and a city of culture, science and commerce. From the colourful markets, to the ancient monuments, to the hustle and bustle of Plateia Syntagmatos (Constitution Square), Athens is rich with history and an important influence on the development of Western civilization. Named after the goddess of wisdom Athena, Athens encircles eight hills within its borders. The most prominent of these, the Acropolis, stands as the ultimate architectural and artistic expression of the ancient Athenian spirit. Athens is a growing city, engulfing its neighbouring suburbs all the way to Piraeus, the city's port and gateway to the Greek isles.

Today we travel by train north to Kalambaka, our base for exploring the spectacular “hanging” monasteries of Meteora, perched atop pinnacles of rock. Day 4 will be a full day for us to discover the secrets of this mysterious and astonishing place. Learn about the monasteries’ history as you discover their rich heritage. We will take a bus up to see several monasteries in the area situated at 613m above sea level, on a precipitous rock pinnacle. The day is yours to choose which monasteries to visit or perhaps take a hike in the scenic local area.

An early departure by bus from Meteora takes us through spectacular mountain scenery, through the region of Thessalia and south around the foot of the imposing and mythical Mount Parnassos, to arrive at Delphi, a small town perched at the edge of a cliff with fantastic views of the valley below. This afternoon, there may also be the chance to make an optional excursion to the beach at Galaxidi, or hike in the Parnassos.

Enjoy a visit to the Temple of Apollo, then spend the evening exploring the charming little town or relaxing in a small café enjoying the views of the nearby valley.

Nafplio is often described as one of the country’s prettiest towns. Lose yourself in the narrow pedestrian streets of the old town and explore the many sights, sounds and smells it has to offer. Don’t miss the climb up to the Acronafplia and Palamidi Fortresses, whose proud Venetian ramparts dominate Nafplio’s skyline. The views from the top of Acronafplia are phenomenal, looking back over the bay to Argos and out into the Saronic Gulf.

There is a wealth of ancient sites within easy reach of Nafplio if you’re looking for some more culture to round of your experience. Opt for a guided tour of Epidavros, which is highly regarded as one of the most renowned of Greek ancient sites, housing a huge, well-preserved theatre famous for its incredible acoustics, as well as the remains of an important medical sanctuary. Also close by, opt to visit the famous Mycenae with its spectacular treasury and ruins, and for another lesser-known Mycenean site, there is Tiryns, just in the suburbs of Nafplio itself.

In the early evening of Day 7 travel 3 hours by bus to Athens before boarding an overnight ferry to Crete. The journey is approximately 8hrs in 4-berth mixed sex cabins.

Arrive to Crete early by ferry and enjoy the day relaxing at one of the many harbourside cafés, wander the streets of the old town with its fascinating blend of ancient and modern, Turkish and Venetian architecture, reflecting the diverse history of the island.

Crete is Greece’s largest island, filled with stunning scenery and friendly people. Although most tourists only see the major towns on the north coast, we will be visiting some of the smaller towns of the southwestern coast and interior, where our walks take place. Crete has an interesting and full history, beginning with the Minoan culture, which flourished from about 2800 BC and suddenly disappeared around 1450 BC. Crete then passed through the hands of the Romans, Genoese, and Venetians before the Turks finally conquered it in 1670. It became a British protectorate in 1898 after much social and civil unrest, and was finally united with mainland Greece in 1913.

Today we set off to hike the famous and spectacular Samaria Gorge, carrying only a day pack while the luggage is transferred to Agia Roumeli. The first part of the walk is the steepest but the path is very well maintained, so about an hour later we should reach the bottom of the gorge and follow the riverbed. We will make a stop to eat our packed lunch by the river. After around 6 hours of walking, we’ll reach the fishing village of Agia Roumeli where we spend the night. There will be plenty of time for swimming or just resting on the beach when we reach the coast.

Samaria Gorge is well known in Europe as a unique geological formation. It is the deepest and narrowest gorge on the continent. At one point, it's width is less than 2.5m and the height of the stone walls exceeds 600m at many points. The natural beauty of the area overrides any feeling of exhaustion during the walk.

Agia Roumeli is a small settlement at the exit point of the Samaria gorge. The village is built on the ancient site of Tarra, mentioned by many ancient writers as a small but independent-minded town. It used to mint its own coins, on one side depicting the Cretan mountain goat and an arrow, and on the other side a bee. Agia Roumeli is very remote, connected with neighbouring towns and villages only by sea or footpaths.

Estimated travel time: 1.5hrs by bus and 5-6 hours by foot

The seaside village of Loutro is situated at the end of Cape Mouri, where the ancient city of Finix once stood. The village was named after the baths (Loutra) found in the area, from which water was directed to nearby Anopoli. Loutro also served as the port of ancient Anopoli. Later it became the winter time port of the town of Sfakia, due to the fact that the enclosed bay and the small island in its entrance create a natural harbor where ships can be safe even in very bad weather conditions. Loutro is completely inaccessible by major roads, with sea and mountain paths being the only transportation routes.

These mountains rearing straight up from the sea, deep wooded gorges, ravines and valleys have been the site of many heroic deeds, ancient civilizations, and constant intrigue for thousands of years. Today the village of Loutro is a magnet for tourists, especially for other Cretans who escape the crowded and noisy northern regions of Crete, for peace, fun, and relaxation. Loutro is their secret holiday hideaway not yet discovered by the average tourist.

The majestic scenery, crystal clear Mediterranean water, friendly people and peaceful atmosphere all make Loutro an ideal place to relax after all the distance we have covered. Enjoy a cooking class and lunch with a local family who will share with you the secrets of home cooked Cretan cuisine.

The capital of Crete, Iraklio is the fourth largest city in Greece. For over 4000 years it's been the busiest port city in the Mediterranean and was one of the worlds' first trading posts.

Enjoy an included visit to Knossos, an archaeological site of an ancient city, site of a Minoan palace and residence of King Minos.

Ferry to Santorini. Enjoy two nights on the island, opt to enjoy a Santorini sunset tour or take a half-day volcano boat tour.

Known as "Thira" in Greek, Santorini is the southernmost island of the Cyclades, and is regarded by some as the most beautiful of the Greek Islands. Formed by a violent volcanic eruption, the ring-shaped island has a stunning caldera lined with high cliffs—easy to appreciate when arriving by boat.

The shape of the crater ring has constantly changed over the last 3000 years with several parts of the crater wall collapsing into the sea. Remarkably, the island has always been resettled due to the rich volcanic soil's fertile properties. The wines, tomatoes and cucumbers from this island are super tasty due to the soil composition and low rainfall. Visitors can make their way from sea level to the crater rim either by bus, gondola or even a donkey ride. Fira, the main town, sits perched on the edge of the caldera with breathtaking views of multi-coloured cliffs, sugar-cube architecture and great shopping!